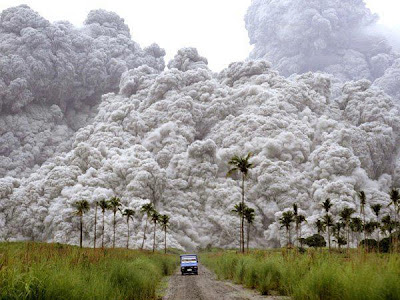 In June 1991, the second largest volcanic eruption of the twentieth century* took place on the island of Luzon in the Philippines, a mere 90 kilometers (55 miles) northwest of the capital city Manila. Up to 800 people were killed and 100,000 became homeless following the Mount Pinatubo eruption, which clima
xed with nine hours of eruption on June

15, 1991. On June 15, millions of tons of sulfur dioxide were discharged into the atmosphere, resulting in a decrease in the temperature worldwide over the next few years.

Mount Pinatubo is part of a chain of composite volcanoes along the Luzon arc on the west coast of the island (area map). The arc of volcanoes is due to the subduction of the Manila trench to the west. The volcano experienced major eruptions approximately 500, 3000, and 5500 years ago
—
Email ThisBlogThis!Share to TwitterShare to FacebookShare to Pinterest