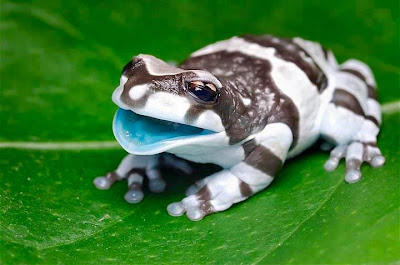 
The Amazon Milk frog is a beautiful species of treefrog that has only been available in the UK for a short period of time. The species has been available to keepers in other countries a little longer. They are of similar appearance to Whites treefrogs (Litoria caerulea) in their build, they are heavy bodied and stocky with a certain level of cute dumpiness. They ar

e also of a similar adult size, around 6-10cm. The colours and patterns differ though, although variable, the majority seen in captivity in the UK are grey and black with a bluish tinge. They are exceptionally beautiful as babies, the grey is replaced with a silvery white. They have a white milk like (hence the name) secretion that is thought to be poisonous and used as a defence. The skin has a granular and bumpy texture.
Email ThisBlogThis!Share to TwitterShare to FacebookShare to Pinterest