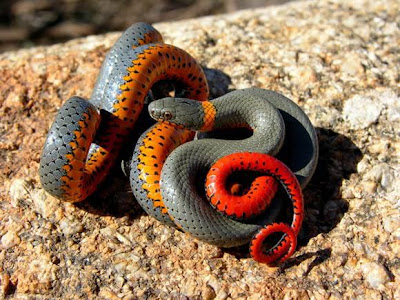 The Ringneck Snake (Diadophis punctatus) is a member of the colubridae family. It is found throughout much of the United States, central Mexico, and south eastern Canada. Ring-necked snakes are secretive, nocturnal snakes that are rarely seen during the day time. They are slightly venomous but their non-aggressive nature and small rear-facing fangs pose little threat to humans

who wish to handle them. They are best known for their unique defense posture of curling up their tails exposing their bright red-orange posterior, ventral surface when threatened. Ring-necked snakes are believed to be fairly abundant throughout most of their range though no scientific evaluation supports this theory. Scientific research is lacking for the ring-necked snake and more in-depth investigations are greatly needed. It is the only species within the genus Diadophis, and currently fourteen subspecies are identified, but many herpetologists question the morphologically-based classifications.
Email ThisBlogThis!Share to TwitterShare to FacebookShare to Pinterest