FACTS ABOUT NEIL ARMSTRONG THAT YOU DIDN'T KNOW 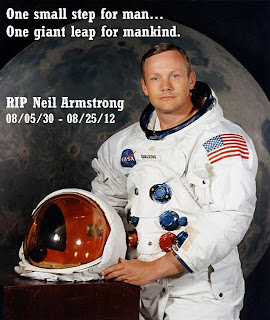 Neil Armstrong, the first man to walk on the moon, died yesterday at the age of 82. In commemoration to his contribution to science, Stunning Facts will share to you several facts about him.
* Armstrong grew up in Ohio with a strong interest in flight and earned his pilot's license while still a boy.


* After flying combat missions during the Korean War, he became a test pilot and joined NASA's astronaut program in 1962.

* Most of you know this fact already, but for the sake of others who don't know, as he stepped on the moon's dusty surface, Armstrong said: "That's one small step for a man, one giant leap for mankind."

* Armstrong's pulse was measured at 150 beats per minute as he guided the lunar lander to the moon's surface, NASA said. Asked about his experience on the moon, he told CBS: "It's an interesting place to be. I recommend it."

* A crater on the moon is named for Armstrong. It is located about 30 miles (48km) from the site of the landing.

* Armstrong took a NASA desk job after the Apollo 11 mission, becoming the deputy associate administrator for aeronautics in the office of advanced research and technology. A year later he became a professor of engineering at the University of Cincinnati.

* In 2005 Armstrong was upset to learn that his barber had sold clippings of his hair to a collector for $3,000. The man who bought the hair refused to return it, saying he was adding it to his collection of locks from Abraham Lincoln, Napoleon, Marilyn Monroe, Albert Einstein and others.

* Despite his taciturn nature, Armstrong once appeared in a television commercial for the US automaker Chrysler. He said he made the ad because of Chrysler's engineering history and his desire to help the company out of financial troubles.
Email ThisBlogThis!Share to TwitterShare to FacebookShare to Pinterest
Newer Post Older Post Home