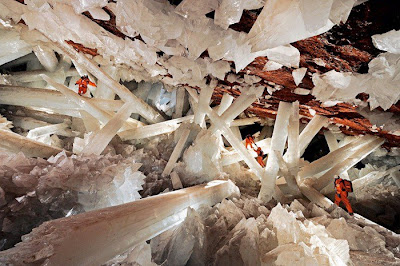 Nearly 1,000ft below the Chihuahua Desert in Mexico, a gigantic cave was discovered by two brothers drilling in the Naica lead and silver mine in 2007-2008. It was an eerie sight. Obelisks shaped crystals up to 37 feet (11 meter) in length and the equivalent height of six men jutted out from the damp rock walls, and there were hundreds of blade-sharp cryst

The giant obelisks are formed from groundwater saturated in calcium sulphate which filtered through the cave system millions of years ago. These water warmed by an intrusion of magma about a mile below, began filtering through the cave system millions of years ago. When, about 600,000 years ago, the magma began to cool, the minerals started to precipitate out of the water, and over the centuries the tiny crystals they formed grew and grew until 1985, when miners unwittingly drained the cave as they lowered the water table with mine pumps.
Because the crystals resemble giant icicles, the picture suggests it must be very cold inside the Cave of Crystals - but appearances can be deceptive. In fact, the temperature is a sweltering 112F, with a humidity of 90-100 per cent. The cavers had to wear protective suits and carry backpacks of ice-cooled air.
The cave has now been fitted with a heavy steel door to preserve this beautiful wonder for generations to come.
Email ThisBlogThis!Share to TwitterShare to FacebookShare to Pinterest