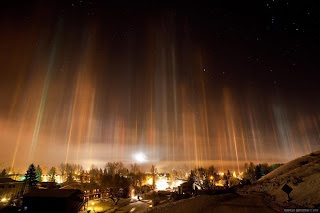 Sometimes during very cold weather, vertical columns of light beaming directly upwards are visible. These are called light pillars and are created by the reflection of light from ice crystals with near horizontal parallel planar surfaces. The light can come from the Sun (usually at or low to the horizon) in which case the phenomenon is called a sun

pillar or solar pillar. It can also come from the Moon or from terrestrial sources such as streetlights. Light pillars are typically seen in polar regions.
Light pillars appear when artificial light or natural light bounces off the facets of flat ice crystals wafting relatively close to the ground. When the light source is close to the ground, the light pillar appears above the floating crystals. When the light comes from the sun or moon, the light pillar can appear beneath them, too, as the light refracts through the crystals.
Email ThisBlogThis!Share to TwitterShare to FacebookShare to Pinterest