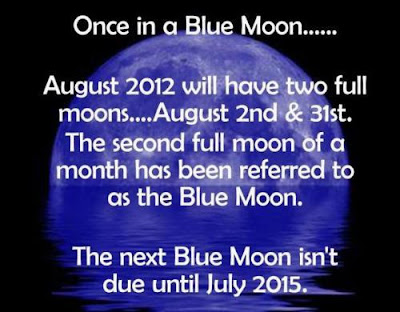 Once in a Blue Moon..... (August 31, 2012)
#The phrase, 'once in a blue moon' today has come to mean "every now and then" or "rarely"—whether it gained that meaning through association with the lunar event remains uncertain.
It should be noted, however, that "blue moon" is a term of folklore, not science. Its definition has varied over time. Moreover, while the current definition of "blue moon"

is barely 65 years old, the phrase itself, not to mention its metaphorical use to denote any sort of rare occurrence (e.g., "that only happens once in a blue moon"), has existed for centuries.

More likely, says Memorial University of Newfoundland folklorist Dr. Philip Hiscock, the metaphor speaks to the rarity of a more literal phenomenon, namely the face of the moon actually appearing to turn blue in color — which it has only a few times in recorded history. Perhaps the most dramatic instance was after the 1883 eruption of Krakatoa, which sent tons of volcanic dust into the atmosphere, creating reddish-gold sunsets as far away as the British Isles and "tinting" the moon blue or green, according to observers.
Email ThisBlogThis!Share to TwitterShare to FacebookShare to Pinterest