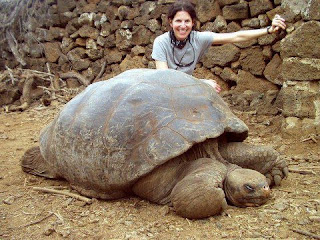 The Pinta Island tortoise is the rarest animal in the world. There is ONLY ONE LEFT on Earth. His name is "Lonesome George"

Lonesome George is the last member of the Pinta Island subspecies of Galapagos tortoises. He was discovered in 1972, and brought to the Charles Darwin research station on the island of Santa Cruz. He is roughly 90 to 100 y

Currently, researchers are trying to get George to mate. They haven't found a female Pinta Island tortoise (if you found one, the reward is $10,000). Instead, they're trying to get him to mate with some other Galapagos tortoises from a different subspecies. That way, even though the babies wouldn't be purebred Pinta Island turtles, at least some of George's genes would pass on..

So far, George has failed to produce any offspring. He lives with two females but the eggs they have been laying have been inviable and won't hatch..
Email ThisBlogThis!Share to TwitterShare to FacebookShare to Pinterest