The Dog Who Refuses to Leave His Owner’s Graveside. 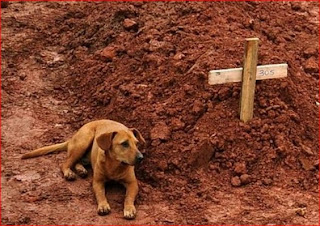 Leao – The Dog Who Refuses to Leave His Owner’s Graveside. :(#Dogs, truly a man's bestfriend!A photo of a Brazilian dog siting by his owner’s muddy grave, near Rio de Janeiro. His name is Leao and simply refuses to leave the graveside of his owner Cristina Maria Cesario Santana, who died during the terrible landslides that devastated Brazil. As the mudslides death toll hits 630, a loyal dog re

fuses to leave the muddy graveside of its owner.

The photo of Leao remind us of the true story of Hachiko, another monument of canine loyalty that has inspired Japanese dog lovers for years..
Email ThisBlogThis!Share to TwitterShare to FacebookShare to Pinterest