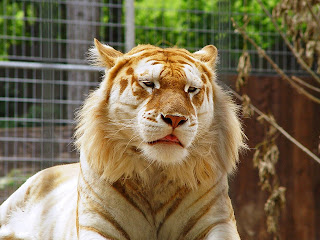 The Rare GOLDEN TIGER!#The golden tiger (golden tabby tiger, strawberry tiger) is even rarer than the white colour morph.The gold colour is due to a recessive mutation, probably analogous to wide-band in domestic cats. The mutation causing the colour change seems also to affect the structure of the fur so that it is softer than that of a standard orange tiger. There is none of the black colou

ration of an orange tiger and this lack of black striping makes their white markings unusually prominent, especially on the face.

As with the white tiger, the golden tiger is usually considered a form of Bengal tiger. They tend to have problems with their pelvic girdles and lumbar vertebrae.
Email ThisBlogThis!Share to TwitterShare to FacebookShare to Pinterest