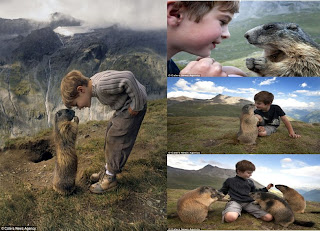 They are notoriously shy around humans, beating their tails and chattering their teeth to try to warn us off before emitting loud whistles to tell other members of their colony to flee.

But when these alpine marmots see Matteo Walch, they scuttle to his side and show him nothing but affection.

The eight-year-old had built up a remarkable relationship with the creatures since first being taken to see them by his nature-loving family four years ago.

The family return to visit the colony in Groslocker in the Austrian Alps for two weeks every year.

'He loves those animals and they are not at all afraid of Matteo because he has a feeling towards them and they understand that.

‘We go there every year now for two weeks - it’s amazing to watch the connection between a boy and his animal friends.’

Marmots stand at around 18cm tall and reach up to 50cm in length.

Bizarrely, the animals are heavier in the autumn, when they can weigh up to 8kg, in comparison to 3kg in the spring months.

It is clear from the pictures that Matteo and the marmots are totally comfortable in each other’s company.