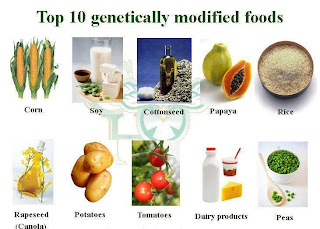 red to have smaller offspring and fertility problems.

2. Soy - Soy has also been genetically modified to resist herbicides. Soy products include soy flour, tofu, soy beverages, soybean oil and other products that may include pastries, baked products and edible oil. Hamsters fed with GM soy were unable to have offspring and suffered a high mortality rate. Canola

3. Cotton - Like corn and soy, cotton has been designed to resist pesticides. It is considered food because its oil can be consumed. Its introduction in Chinese agriculture has produced a chemical that kills cotton bollworm, reducing the incidences of pests not only in cotton crops but also in neighboring fields of soybeans and corn. Incidentally, thousands of Indian farmers suffered severe rashes upon exposure to BT cotton.

4. Papaya - The virus-resistant variety of papaya was commercially introduced in Hawaii in 1999. Transgenic papayas comprised three-fourths of the total Hawaiian papaya crop. Monsanto bestowed upon Tamil Nadu Agricultural University in Coimbatore technology for developing papaya resistant to the ringspot virus in India.

5. Rice - This staple food from South East Asia has now been genetically modified to contain a high amount of vitamin A. Allegedly, there are reports of rice varieties containing human genes to be grown in the US. The rice will create human proteins useful for dealing with infant diarrhea in the 3rd world. China Daily, an online journal, reported potential serious public health and environment problems with genetically modified rice considering its tendency to cause allergic reactions with the concurrent possibility of gene transfers.

6. Tomatoes - Tomatoes have now been genetically engineered for longer shelf life, preventing them from easily rotting and degrading. In a test conducted to determine the safety of GM tomatoes, some animal subjects died within a few weeks after consuming GM tomatoes.

7. Rapeseed - In Canada, this crop was renamed canola to differentiate it from non-edible rapeseed. Food stuff produced from rapeseed includes rapeseed oi (canola oil) l used to process cooking oil and margarine. Honey can also be produced from GM rapeseed. German food surveillance authorities discovered as much as a third of the total pollen present in Canadian honey may be from GM pollen. In fact, some honey products from Canada were also discovered to have pollen from GM rapeseed.

8. Dairy products - It has been discovered that 22 percent of cows in the U.S. were injected with recombinant (genetically modified) bovine growth hormone (rbGH). This Monsanto created hormone artificially forces cows to increase their milk production by 15 percent. Milk from cows treated with this milk inducing hormone contains increased levels of IGF-1 (insulin growth factors-1). Humans also have IGF-1 in their system. Scientists have expressed concerns that increased levels of IGF-1 in humans have been associated with colon and breast cancer.

9. Potatoes - Mice fed with potatoes engineered with Bacillus thuringiensis var. Kurstaki Cry 1 were found to have toxins in their system. Despite claims to the contrary, this shows that Cry1 toxin was stable in the mouse gut. When the health risks were revealed, it sparked a debate.

10. Peas - Peas that have been genetically modified have been found to cause immune responses in mice and possibly even in humans. A gene from kidney beans was inserted into the peas creating a protein that functions as a pesticide.
Email ThisBlogThis!Share to TwitterShare to FacebookShare to Pinterest