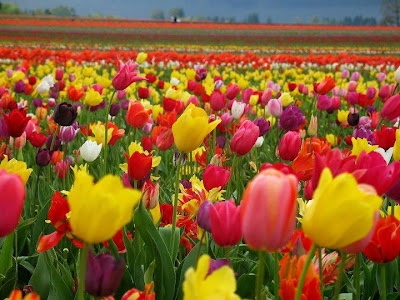 The tulip originated centuries ago in Persia and Turkey, where it played a significant role in the art and culture of the time. Most likely commenting on the Turkish tradition of wearing tulips in one's turban, Europeans mistakenly gave tulips their name, which comes from the Persian word meaning turban. As Europeans began taking to tulips, the flower's popularity spread quickly, par
ticularly in the Netherlands where a phenomenon dubbed tulip mania set in at one point during the 17th century. Tulips became so highly-prized that prices were sent soaring and markets crashing. Tulips are now grown throughout the world, but people still identify cultivated varieties as"Dutch tulips."

The meaning of tulips is generally perfect love . Like many flowers, different colors of tulips also often carry their own significance. Red tulips are most strongly associated with true love, while purple symbolizes royalty. The meaning of yellow tulips has evolved somewhat, from once representing hopeless love to now being a common expression for cheerful thoughts and sunshine. White tulips are used to claim worthiness or to send a message of forgiveness. Variegated tulips, once among the most popular varieties due to their striking color patterns, represent beautiful eyes.