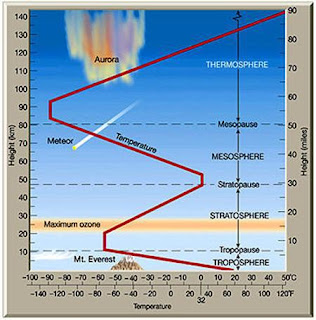 1. We live in the TROPOSPHERE layer of atmosphere. It contains more than 75% of the atmosphere.2. Most of the clouds and rain are in TROPOSPHERE. It extends up to 48km above the earth.

3. The Earth's atmosphere is more than just the air we breathe. It's also a buffer that keeps us from being peppered by meteorites, a screen against deadly radiation, and the reason radio waves can be bounced for long distances around the planet.

4. The Ionosphere layer Reflects radiowaves back to Earth so signals can be sent around the world.

5. The Exosphere layer begins at ~480km above the Earth and fades away into space.
Email ThisBlogThis!Share to TwitterShare to FacebookShare to Pinterest