A man who was in Hiroshima and then Nagasaki 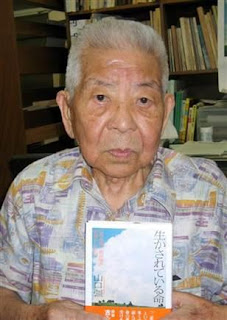 A man who was in Hiroshima and then Nagasaki, respectively, when the atomic bombs were dropped on those cities and survived.

Tsutomu Yamaguchi, the only person officially recognized as a survivor of both the Hiroshima and Nagasaki atomic bombings at the end of World War II, has died at age 93.
Yamaguchi was in Hiroshima on a business trip for his shipbuilding company on Aug. 6, 1945, when a U.S.
B-29 dropped an atomic bomb on the city. He suffered serious burns to his upper body and spent the night in the city.
He then returned to his hometown of Nagasaki, about 190 miles to the southwest, which suffered a second U.S. atomic bomb attack three days later.
On Aug. 15, 1945, Japan surrendered, ending the war.
The mayor of Nagasaki said "a precious storyteller has been lost," in a message posted on the city's Web site Wednesday. Yamaguchi died Monday morning of stomach cancer, the mass circulation Mainichi, Asahi and Yomiuri newspapers reported.
Email ThisBlogThis!Share to TwitterShare to FacebookShare to Pinterest