Benefits of Spice which hidden in your kitchen cabinet 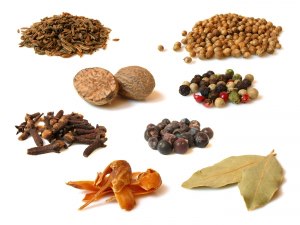 As per the studies there are various benefits of spices which can protect your from various desease and even this spices are used in thousand of medicine from ages. Here are few for your knowledge and if it used correctly then it can give new dimension to your food.Rosemary can protect us from formation of carcinogenic compounds called het

erocyclic amines in meat when the cooking method is broiling, grilling, or frying, and its works perfectly in meat marinades. Due to its antioxidant content.

Ginger is a proven way to settle a sick stomach. Ginger can also relieve cough and congestion symptoms thanks to the phytochemicals shogaol and zingerone. The health benefits of ginger do not stop at helping common sickness, however. Ginger also has shown the ability to reduce muscle ache, decrease arthritis pain, and potentially fight various cancers. Some ways to utilize ginger: put in tea, soup, or a stir-fry.

Saffron is a potent mood boosting spice. Consuming saffron has been shown to decrease depression as well as post menstrual symptoms. Two tasty ways to add saffron into your culinary repertoire: cook into rice dishes and use in tomato-based sauces.

Cinnamon contains iron, calcium, manganese, and fiber, and can be used to temper sugar cravings. Another important noted effect of cinnamon is its impact on stabilizing blood sugar levels. Try cinnamon in coffee, on fruit, or in a baked sweet potato.

Chili peppers contain capsaicin, which increases metabolism and satiety in addition to triggering proteins in fat to break fat down, showing great potential for those with body re-composition goals. Chili peppers also increase the resistance to harmful bacteria in stomach cells, which may decrease the risk of developing an ulcer. Add chili peppers to any dish that could use a bit of heat.
Email ThisBlogThis!Share to TwitterShare to FacebookShare to Pinterest