Coconut Tree: The Tree of Life 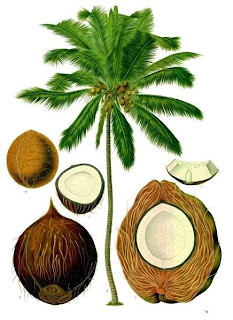 Why is a coconut tree called “The Tree of Life”? Let’s all find out together.
The Coconut Tree is known to have many uses, from its roots to tips (leaves), from culinary to non-culinary. In the Philippines, the coconut tree is considered as the “Tree of Life”.


You must be wondering, why is that so? Allow me to cite the different parts of the coconut tree and its corresponding benefits and/or uses. Let’s start with…

Coconut roots are used as beverage, dye, mouthwash, and medicine for dysentery (formerly known as flux or the bloody flux). A frayed-out piece of root can also be used as a toothbrush.

Coconut trunks, its hardy and durable wood is used for building small bridges, preferred for their straightness, strength and salt resistance. It is also used to make benches, tables, carvings, picutre frames, tables, tool boxes and construction materials, among others. Paper pulp can also be extracted from the coconut trunk and other woody parts of the tree.

Coconut fruit produces buko, often used for salads, halo-halo (crushed ice with sweetened fruit), sweets and pastries. The “sport fruit” of the coconut known as makapuno is primarily harvested in the Philippines. They are sold in jars as “gelatinous mutant coconut” cut into balls or strands. Considered a delightful delicacy and largely used for making preserves and ice-cream. It is possible for it not to be kept in storage and still, will not germinate.

Coconut meat is the thick white, fleshy substance found inside the coconut shell. It is edible and can be used fresh or dried in cooking. It can also be used to obtain coco flour, desiccated coconut, coconut milk, coconut chips, coconut candies, bukayo or local sweetened shredded coconut meat, latik copra and even, animal feeds.

Coconut water provides an isotonic electrolyte balance, and is a highly nutritious food source. Uses of coconut water include: coconut water vinegar; coconut wine; production of the chewy, fiber-rich “nata”, good as a dessert and as a laxative; as a growth factor; and as a substitute for dextrose. It is also used to cure renal disorders. “Bukolysis” is the medical process of reducing or dissolving urinary stones from the urinary tract, using buko water from 7 to 9 months old coconuts. If you heard of “water therapy”, there is also such thing as “buko/coconut therapy”.

Coconut milk is made by processing grated coconut with hot water or milk, which extracts the oil and aromatic compounds. It should not be confused with the coconut water mentioned above, and has a fat content of approximately 17%. When refrigerated and left to set, coconut cream will rise to the top and separate out the milk. The milk is used to produce virgin coconut oil. It is a common ingredient in many tropical cuisines. In Thailand, coconut milk is the base of most Thai curries.

Copra is the dried coconut meat and, after further processing, is a source of high coconut oil content (as much as 64%). Coconut oil is the most readily digested, of all the fats, generally used in the world. Its chief competitors are soya bean oil, palm oil and palm kernel oil. It can be rapidly processed and extracted as a fully organic product from fresh coconut flesh, and used in many ways including as a medicine and in cosmetics, or as a direct replacement for diesel fuel. Virgin coconut oil is found superior to the oil extracted from copra for cosmetic purposes.

Apical buds of adult plants are edible and are known as “palm-cabbage” or heart-of-palm. In the Philippines, it is known as ubod and considered one of the finest vegetables. It is considered a rare delicacy, as the act of harvesting the bud, could kill the palm. It can be served in many appetizing ways. Cubed in fairly large bits, makes a wonderful addition to Spanish rice, or in their long strips, to Arroz a la Cubana. It is also eaten in salads (mixed with mayonnaise or thousand island dressing), known as “Millionaire’s Salad”.

Out of the bud of the coconut tree’s infloresence is a fermented juice called coconut toddy or, in the Philippines, tuba. The principal uses of the toddy are: as fresh beverage; for producing alcoholic beverages; for producing vinegar; for making sugar; and as a source of yeast for making bread.

Coconut Husk
Coconut husks are made of bristle fiber (10%), mattress fiber (20%) and coir dust and shorts or wastes (70%). Coir is used in ropes, mats, brushes, caulking boats and as stuffing fibre; it is also used extensively in horticulture for making potting compost. The husk can be used for fuel and are a good source of charcoal. Dried half coconut shells with husks are used to buff wooden floors, making it clean and shiny (free from dusts). In the Philippines, it is known as “bunot”. Fresh inner coconut husk can be rubbed on the lens of snorkelling goggles to prevent fogging during use.

Coconut shell produces the core of the most saleable household products and fashion accessories that can be turned into lucrative, wide-selling cottage industries. In the Philippines, dried half shells are used as musical instrument in a folk dance called “Maglalatik”, a traditional dance about conflicts for coconut meat within the Spanish era. They are also used in theatres, banged together to create the sound effect of a horses’ hoofbeats. Half coconut shells may be deployed as an improvised bra, especially for comedic effect or theatrical purposes. Shirt buttons can be carved out of dried coconut shell. Coconut buttons are often used for Hawaiian Aloha shirts.

You see how amazing the coconut tree is? In fact, in the Philippines, it is considered as one of the major dollar earner industry that provides livelihood to most of the country’s population. Indeed, a Tree of Life!

And did you know that in World War II, coastwatcher scout Biuki Gasa was the first of two from the Solomon Islands to reach the shipwrecked, wounded, and exhausted crew of Motor Torpedo Boat PT-109 commanded by then, the future U.S. President John F. Kennedy. Gasa suggested, for lack of paper, delivering by dugout canoe, a message inscribed on a husked coconut shell. This coconut shell was later kept on the President’s desk, and is now, in the John F. Kennedy Library.
Email ThisBlogThis!Share to TwitterShare to FacebookShare to Pinterest
Newer Post Older Post Home