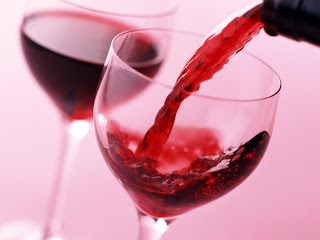 Red wine contains a group of chemicals called polyphenols (once called Vitamin P) which have been found to be very beneficial for health. They reduce the risk of heart disease and cancer. Wine has also been found to be an effective anti-bacterial agent against strains of Streptococcus (found most often in the human mouth) which can help reduce infections. Some wine vari

eties have extra health benefits; Cabernet Sauvignon appears to reduce the risk of Alzheimer’s Disease. In addition to the benefits already listed, wine is chock full of antioxidants which play a huge role in the health of the human body. The wines found to have the greatest benefits are found in the South of France and the Sardinia region of Italy.

Interesting Fact: Wine originated in the regions of Israel, Georgia, and Iran, around 6000 BC.
Email ThisBlogThis!Share to TwitterShare to FacebookShare to Pinterest