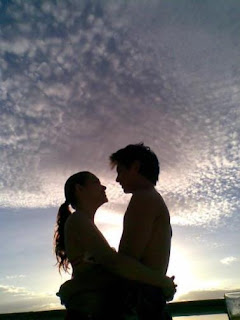 My first wife used to cover me with red lipstick kisses before we made love. I must admit, it really turned me on. I would watch her apply it while standing in front of a mirror. After finishing, she would turn to me and begin kissing me all over my face and neck.One night we had a terrible argument after having too much to drink at a party. I'm embarrassed to admit it, but she had bruised my ma

We had been at a party that was held both indoors and out. There was a badminton net in the backyard and we started playing.

At first, we just volleyed back and forth but we moved on to playing a game.

Some women started watching us play and helped keep score. The first game was close but she pulled ahead towards the end and won 15 � 12. She received a loud applause from the women spectators.

I started to walk off the playing field thinking that we had played enough for the day. That was when my wife yelled out, "What's the matter? Afraid to get beaten by a woman in front of everyone?" Hence, I agreed to play another game and got soundly trounced. I think the score was around 15 - 3.

We stayed for about two more hours and consumed more margaritas than we should have.

While we were driving home, she kept talking about how much fun it had been.

My replies were short and with a bit of an edge. After a while, she became angry about my attitude and things started to escalate. When we got home, it got much worse. At some point, I said something really ugly and she whirled around and socked me right in the eye, knocking me flat on the floor. I'm not sure if I was knocked unconscious or not but the next thing I knew, I was hit by my pillow which she had thrown.

She stormed off upstairs and locked herself in our bedroom door while I staggered over to a sofa and fell asleep. I really should have iced my injured eye before falling asleep because in the morning, it was almost swollen shut. My eye was all blood shot and there was dark black and blue bruising around. I was so mad at my wife. How was I going to explain this bruised and swollen eye to everyone in the coming week?

I think my wife was a little shocked when she saw what she had done. However, she didn't say anything and we stayed clear of each other for most of the day.

In the evening, I was watching football on the television when my wife came into the room dressed rather provocatively with her red lipstick on. She sat down next to me. I tried to ignore her and concentrate on the game but she started kissing my face. I was trying to hold on to my anger but she was wearing me down. After a couple of minutes, I took a glance at our reflections in a mirror on the wall. She looked at the mirror at the same time and our eyes met. I probably had a dozen large lip prints all over my checks, forehead, neck and everywhere else except near the bruised eye. (It was real sore.)

Both of us broke out laughing. Then we started laughing about the badminton game, the argument and the black eye. She got her camera and took a timed picture of us embracing - me with my black eye covered with lipstick kisses. She had it framed and used to show it to her friends and tell them about the story behind it.

The funny thing is neither of us could remember what I said before she knocked my lights out. While telling the story, she used to say,"We can't remember what he said, but whatever it was, he knows better than to say it again".

We didn't over-indulge ourselves with alcohol very much after that. I learned not to say hurtful or damaging remarks when we argued. I also worked at overcoming my fragile male ego.

The fact was she was a better athlete than I was and regularly beat me in tennis, badminton, volleyball, ping pong and whatever sports that you can name. She even beat me at arm wrestling a few times.

I didn't mind so much as long as it was just between us. She came to realize that she had a hot temper and worked to mellow it. I loved that woman. I lost her to breast cancer after thirteen years of marriage. I sure do miss her.
Email ThisBlogThis!Share to TwitterShare to FacebookShare to Pinterest