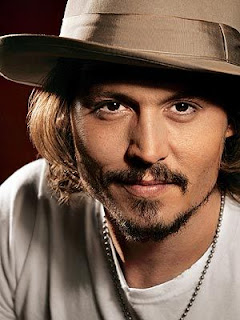 Johnny Depp captures attention wherever he goes. If anyone has a handle on "to thine own self be true" it is Johnny Depp; understandably, this enigmatic actor appeals to the masses.
Johnny Depp Facts
1. Johnny has 13 tattoos--signifying important milestones in the actor's life and the people he has shared time with.
2. Depp has been arrested several times.

3. He has struggled with drugs and alcohol.
4. Johnny plays guitar.
5. He has appeared in music videos and has produced music.
6. He is a fan of Deadsy and The Rolling Stones.
7. He's friends with Marilyn Manson and Tim Burton.
8. Depp is co-owner of a restaurant.
9. He owns an island in the Bahamas.
10. Depp has taken unconventional roles, playing very different characters (see movie listing below)
11. He has won numerous awards, most notably for Pirates of the Carribean.
12. He has been nominated for Academy Awards, Golden Globeand Critic's Choice Awards.
In addition to rakish good looks and a sizzling persona, the fact that Johnny Depp is so real , is perhaps one of the things that has endeared him to fans.
Email ThisBlogThis!Share to TwitterShare to FacebookShare to Pinterest
Newer Post Older Post Home