Lily the Great Dane with no eyes and Maddison, her guide dog. 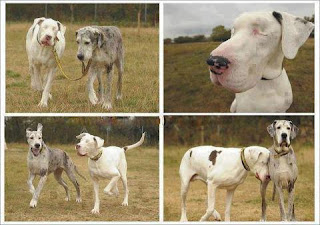 Lily the blind Great Dane and her best friend and guide dog Maddison have found a home at last, after their story went public and warmed hearts around the world.


The two dogs were being cared for by UK dog welfare charity Dogs Trust, which had problems finding a good home willing to take the unlikely pair. Their previous owner could no longer cope with the two big dogs, and in July handed Lily and Maddison over to be rehomed.

According to the Dogs Trust, Lily's eyes were removed as a puppy because of a condition called entropion, which means her eye lashes grew into her eyeballs and damaged them. Maddison began leading her dog friend and steering the way.
Email ThisBlogThis!Share to TwitterShare to FacebookShare to Pinterest