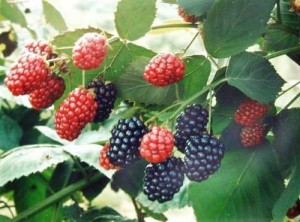 Refreshingly succulent, tart and sweet mulberries are indeed rich in numerous health benefiting flavonoid phyto-nutrients. Botanically, the berries are obtained from the silkworm tree belonging to the moraceaefamily; of the genus: Morus. Scientific name: Morus nigra. L.  In Spanish they are known as moras.
More than hundred species of morus exist. In taxonomy, species generally are identified not by the color of the fruits (berries) but by the color of flower buds and leaves. So, a morus plant can have different colored berries (black, purple, red, white etc) in the same plant.

3 species have been recognized for their economic importance.
Mulberries are large, deciduous trees native to warm, temperate, and subtropical regions of Asia, Africa, and the Americas. Technically, the mulberry fruit is an aggregation of small fruits arranged longitudinally around the central axis as in blackberry or loganberries. Each fruit measures 2-5 cm long. In most species these berries are purple-red when ripen; however they can be white, red, purple or multiple colors in the same fruit.