Orange is the new green in crocodile style this season. 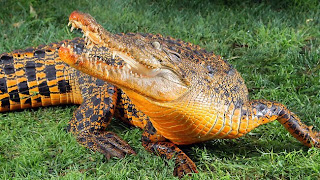 
But it's not really a fashion statement. It's a result of attacking the water filter of his enclosure at Roaming Reptiles animal park in Australia.

"Snappy's pretty territorial and he attacked the filter one day, and a few weeks after that, I noticed he was orange," said owner Tracey Sandstrom in an interview with the Herald Sun.

"It doesn't seem to have affected him at all. He's still got a healthy appetite, is normally aggro and doing everything he always does," said Sandstrom.

A crocodile expert interviewed by the Herald Sun said he believes the croc is in perfect health despite his outrageous new look.

"Our guess is that it is something in the water such as iron or tannins from leaves or some red algae, that oxidises when it dries," Webb said.

Snappy is expected to go back to his normal color eventually.

It seems absolutely fabulous new colors are all the rage in the animal kingdom. Discovery News recently reported on glow-in-the-dark cats.
Email ThisBlogThis!Share to TwitterShare to FacebookShare to Pinterest