SOME interesting FACTS about TAJMAHAL..... 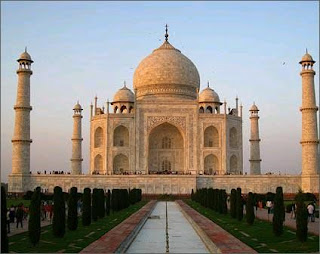 SOME interesting FACTS about TAJMAHAL.....

1. One of the most interesting Taj Mahal facts is that the building will appear to be a different color depending on what time of day it is, and whether or not there is a moon at night.

2. The Taj Mahal is one of the most popular Agra tourist attractions, and the building was started in 1631 by Shah Jahan.

3. The construction of the Taj Mahal took twenty two years to complete, and required more than twenty two thousand workers who were brought in from all over. There were more than one thousand elephants that were used just to haul the materials needed.

4. Interesting Taj Mahal facts include the symmetry of the structure, which is perfect except for the interior tombs. Tradition dictated that the tomb for the male must be larger than the one for the female.

5. There are many Agra tourist places, and a popular one is the black marble base. This base was intended as a mirror image of the Taj Mahal, except for black marble being used in place of white, but the structure was never completed.

6. The Taj Mahal has been designated as one of the new Seven Wonders of the World, and it draws people from everywhere on the globe.

7. One of the really fascinating Taj Mahal facts has to do with the exterior pillars. These were placed at an outward tilt, so if an earthquake occurred the fall of the pillars could be controlled.

8. One of the less common known Taj Mahal facts is that many jewels and semi precious gems were used to decorate the structure. Over the years and through a number of wars and pillages these jewels were removed, but you can still see where they were.
Email ThisBlogThis!Share to TwitterShare to FacebookShare to Pinterest