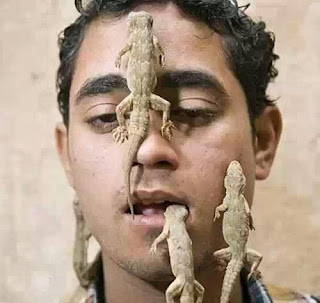 An extra bizarre man from India. He is Navratan Harsh; this youth from india was called as the real lizard boy. uurgh it’s really revolting when i see a lizard on his face. How can Navratan stand out of those revolting lizard??

Navrathan has been enthralled by lizards, ever since he was a young boy & onefell in his lap, at school. Ever since then, he has exhausted most of his days
feeding and playing with his peeling friends, and even letting them creep on his face.

Around his town, Navratan Harsh is known as Gecko King & Mowgli, because of his close link with wildlife. Unlike other boys his age, who spend most of their time celebrations and getting drunk, Navratan look for for lizards, plays and trains them, and them lets them go free.

He says he sense no pain or fear when lizards bite his face…sinister stuff!
Email ThisBlogThis!Share to TwitterShare to FacebookShare to Pinterest
Newer Post Older Post Home