Hugging couple excavated but still together 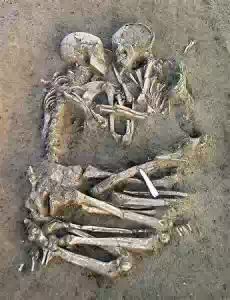 A hugging couple buried more than 5,000 years ago remained inseparable when they were lifted from the ground on the day before Valentine's Day.
Looking to preserve the photogenic embrace, scientists opted against removing the bones one by one.
Instead, they sliced away the entire section of earth in which the couple wereburied.
The plot was boxed up and
is heading for a laboratory for further examination to discover their age, gender and, if possible, cause of death.
"In the end, we want to put them on display at the national museum," said Elena Menotti, the archaeologist who announced the discovery last week.
Archaeologists had to hire extra security to guard the rural site outside the northern city of Mantova from potential looters and vandals after the discovery made headlines around the world.
Scientists acknowledge they know precious little about the Stone Age couple, dubbed the "Lovers of Valdaro" after the Mantova suburb of farmland and factories where they were found.
Even their gender is an open question until scientists confirm the theory they were a man and a woman.
Archaeologists seem certain the couple died young, since their teeth are intact, and that they died during the Stone Age because of an arrowhead and tools found with the remains.
The indications are the couple did not die in each others' arms and were buried that way in some sort of prehistoric cemetery.
While single burials in the Neolithic period were always east-west, possibly following the daily path of the sun across the sky, the hugging Stone Age couple were buried "the wrong way", archaeologists say.
"They were buried North-South, and we don't know why," said archaeologist Daniela Castagna.
Email ThisBlogThis!Share to TwitterShare to FacebookShare to Pinterest
Newer Post Older Post Home