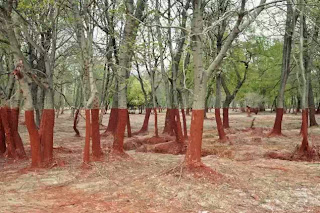 Palindromo Meszaros Captures the Aftermath of Hungary’s Worst Toxic Spill
In October 2010, the small town of Ajka, Veszprém County, in western Hungary,witnessed an environmental disaster that is considered the worst in the country’s history. The wall of a waste reservoir in an aluminum factory collapsed, releasing around a million cubic metres of toxic waste. The two meter-high red toxic mud slide
flooded several nearby localities, burying buildings, poisoning fields and killing nine people. It took nearly a week to contain the spill and several weeks thereafter to cleanup. But every where the sludge touched, it left behind an indelible red line.
Six months after the incident, Spanish photographer Palindromo Meszaros decided to document the effects of the massive spill through this set of photographs entitled “The Line”. Mészáros creates these images by lining up the tip of the red stains with the horizon line in each photograph making it look as if someone had painted the town red on purpose.
"Sometimes people think that it is a conceptual installation when they start watching," Meszaros says. "It's an effect I was definitely looking for — something could seem beautiful and evocative somehow but at the same timemake people understand how terrible it was."
Email ThisBlogThis!Share to TwitterShare to FacebookShare to Pinterest
Newer Post Older Post Home