Positive and negative effects of Caffeine 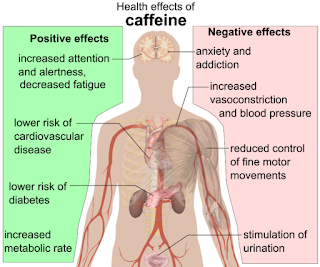 Caffeine is a central nervous stimulant and can have some positive effects on the human body. Caffeine in low doses is thought to be associated with an improvement in sporting performance, increased alertness and reduction in fatigue potentially lifting a person’s mood. Coffee and tea also contain some antioxidants which have positive effects on heart health.

However, increased amounts of caffeine lead to dependency due to increased tolerance and hence the need for greater amounts to gain the same stimulatory benefits. Heavy users who have to go without can experience withdrawal symptoms such as headaches and fatigue. Too much caffeine can produce restlessness, nausea, sleep difficulties, upset stomach, increased urine production causing dehydration, and cardiac arrhythmias (irregular heartbeats). It has also been associated with elevated blood pressure in sensitive persons.
Email ThisBlogThis!Share to TwitterShare to FacebookShare to Pinterest
Newer Post Older Post Home