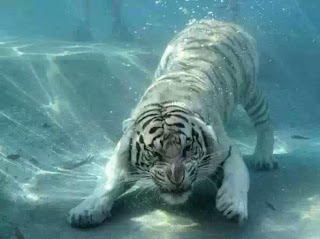 The white tiger (also known as the Bengal tiger) is about 3 meters long, and weighs approximately 180-285 kg (400-569 LB). It’s coat lies flatter than that of the Siberian tiger, the tawny color is richer and the stripes are darker.White tigers are white colored bengals, they are not albinos and they are not a separate subspecies of tigers.They have blue eyes, a pink nose, and creamy white furr

covered with chocolate colored stripes. White tigers are born to tigers that carry the unusualgene needed for white coloring.
The White Tiger is a good swimmer, but a very poor climber.They may be slow runners, but they are stealthy enough to catch any prey in their sights. Becausethey are solitary animals, they mostly hunt at night.
It is belief that if you are born in the Chinese year of the tiger you are unusuallylucky. Let’s hope that some of this luck rubs off on the white tiger before it’s too late. Let's try to protect and preserve their existence on earth.
Email ThisBlogThis!Share to TwitterShare to FacebookShare to Pinterest
Newer Post Older Post Home