Things To Know About Bill Gates 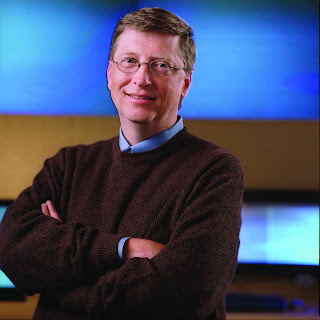 2. If he drops a thousand dollars, he won't even bother to pick it up
because in the 4 seconds it takes to pick it up, he would have already
earned it back.

3. U.S's national debt is about $5.62 trillion. If Bill Gates wants to
pay the debt by himself; he will finish it in less then 10 years.

4. He can donate $15 to everyone on earth and still be left with $5
million for his pocket money.

5. Michael Jordan is the highest paid athlete in the U.S. If he
doesn't drink and eat, and keep his annual income at $30 million,
he'll have to wait for 277 years to become as rich as Bill Gates is
today.

6. If Bill Gates were a country, he will be the 37th richest country on
earth.

7. If you change all of Bill Gate's money to $1 bills, you can make a
road from earth to moon 14 times back and forth. But you will have to
make that road non-stop for 1400 years, and use a total of 713 BOEING
747 planes to transport all the money.

8. Bill Gates will be 57 this year. If we assume that he still can
live for another 25 years, he has to spend $6.78 million per day to
finish his money before his death.

9.Gates told his university teachers he would be a millionaire by age 30. He became a billionaire at age 31.
Email ThisBlogThis!Share to TwitterShare to FacebookShare to Pinterest
Newer Post Older Post Home