What is a Rainbow or What Happens When Light, Water and Air meet? 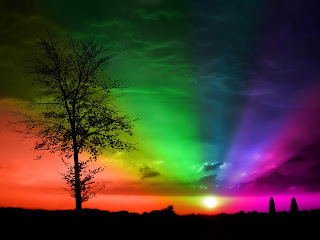 When light and water meet in the sky on a summer's day, for a few moments, a rainbow will appear. Such a beautiful sight! This phenomena of the atmosphere appears during or immediately following local showers, when the sun is shining and the air contains raindrops. A rainbow can best be seen with polarized sunglasses. We cannot fol

low the arc of a rainbow down below the horizon, because we cannot see those droplets in the air below the horizon. But the higher we are above the ground, the more of the rainbow circle we would see. That is why, from an airplane in flight, a rainbow will appear as a complete circle with the shadow of the aitplane in the center.
The bow is divided into bands displaying the different colors of the spectrum and is formed by the refraction and reflection of the sun's rays in drops of rain. Reflection is simply the return of light waves from the raindrop's surface. Light which appears to be white, is really made up of a mixture of red, orange, yellow, green, blue, and violet light.

When a shaft of sunlight enters a drop of water, a part of it does not pass directly through but is reflected from the inner surface and emerges from the side from which it entered. Moreover, it is refracted both on entering and leaving the water drop. This process, repeated in the same manner for an immense number of drops, produces the primary rainbow, which appears in front of the observer, who has his back to the sun. It has the red band on the outer edge which are long light waves and the blue-to-violet on the inner edge which are short light waves.

Another larger bow is often seem outside the primary rainbow and parallel to it. This secondary rainbow is produced in a similar way, but the sun's light is reflected twice before emerging from the raindrop. For this reason, the color sequence is reversed; red is on the inside edge. And because there is a loss of light with each reflection, it is not as bright as the primary rainbow. The region between the two bows is comparatively dark, for it lacks entirely both the once and the twice reflected rays. There is theoretical evidence for a tertiary rainbow , but it would be so faint as to be rarely seen in nature.
Email ThisBlogThis!Share to TwitterShare to FacebookShare to Pinterest
Newer Post Older Post Home