It was a stormy Second World War night when, on February 17, 1941, three lifeboats abandoned the SS Gairsoppa, a 412 foot-long British cargo ship en route from India to Liverpool, England.In service of the Ministry of War Transport, the Gairsoppa was laden with tea, iron and tons of silver. Because of bad weather and insufficient coal, she was forced to break away from the military convoy off the coast of Ireland.As the captain re-routed in emergency for Galway, on the west coast of Ireland, the merchant steamship and its crew of 86 men were hit by a torpedo from a Nazi U-boat. She sank in icy seas within 20 minutes.Left at the mercy of the winds and waves, two lifeboats soon disappeared. A third boat managed to sail for 13 days, with only one person, second officer Richard Ayres, surviving the long journey to shore.
Now, 70 years after the dramatic sinking, treasure hunters have announced the discovery of the Gairsoppa's intact wreck about 300 miles off the coast of Ireland, at a depth of nearly three miles. Laying deeper than the Titanic, the wreck is believed to hold the largest haul of precious metal lost at sea.According to U.S. underwater archaeology and salvage company Odyssey Marine Exploration Inc, up to 240 tons of silver, valued at more than $200 million, could be retrieved by next spring. "We've accomplished the first phase of this project -- the location and identification of the target shipwreck -- and now we're hard at work planning for the recovery phase," Andrew Craig, Odyssey Senior Project Manager, said in a statement.The stern compass discovered on the SS Gairsoppa. Courtesy: Odyssey Marine Exploration, Inc.The wreck was found with the help of an underwater robot which took three and a half hours to descend to the bottom of the Atlantic Ocean.The robot-captured video footage showed a unique view into the rusty ship, revealing a ladder leading to the forecastle deck, a stern compass, and even an intact toilet. The torpedo hole in the hull, which featured the red-and-black colors used by the British Indian Steam Navigation Company, was also clearly visible. Although none of the precious metal was filmed, Odyssey is confident that it is still there.Indeed, video footage showed tea chests, which were reported to have been on board. The account indicated that the Gairsoppa carried 2600 tons of pig iron, 1765 tons of tea, 2369 tons of general cargo and 200 tons of silver ingots and coins."We were fortunate to find the shipwreck sitting upright, with the holds open and easily accessible. This should enable us to unload cargo through the hatches as would happen with a floating ship alongside a cargo terminal," Greg Stemm, Odyssey CEO, said.The company was awarded an exclusive salvage contract by the British government in 2010. Under the agreement, Odyssey will retain 80 percent of the silver's value. 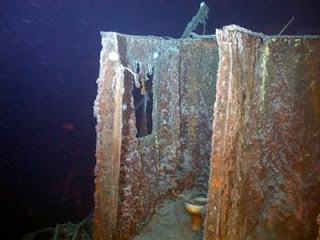 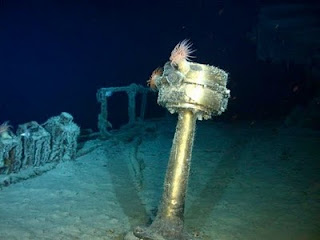