A hotel made of garbage 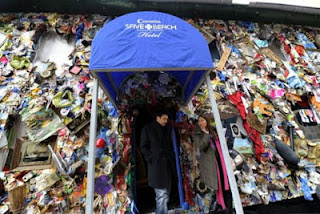 In Madrid has opened a hotel that is entirely made of garbage, says BBC. Walls of Beach Garbage Hotel (coastal garbage) are covered by the tide of garbage caused along the European beaches, waste from landfills and objects that come from markets.

The hotel, which has five rooms, was built by the German conceptual artist Ha Sult at the central Madrid square Plasa Kalao. This interesting project is a part of the International Tourism Fair to be held in the Spanish capital.

Sult said that with this he wanted to draw a public attention to the enormous amount of waste generated by the mass tourism in Europe.

"I built a Beach Garbage Hotel as our oceans become the largest landfill, "said the German artist, stating that 30 to 40 percent of the object which was built this temporary restaurant are collected on the beaches in the UK, France, Germany, Italy and Spain.

Pikeras Rosa, a spokesman for the project, said that the aim of this action is to show the reverse side of the tourism industry. "We wanted to show in what will be our resting places turn unless we clean the beaches, " she said and added that the most neglected coast are of southern Italy.