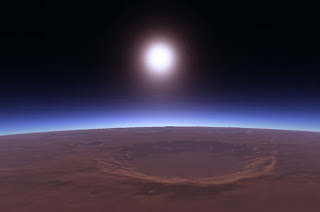 NASA's vehicle "Opportunity" filmed the blue sunset from the surface of the Red Planet.

Although Mars is known as the Red Planet, sunsets on it is actually blue.

The bluish glow around the sun is due to the same dust particles that make Mars' sky appear red. The pictures were taken on Nov. 4 and Nov. 5 using three different filters on the rover's panoramic camera. The images, along with a second series of the Martian moon Phobos passing in front of the sun, inspired camera lead scientist Jim Bell with Cornell University to quote Proust in a NASA press release about the films.

So far the longest shot sunset on Mars was published by NASA's JPL laboratory in California. The material was taken with the camera on board NASA's "Opportunity" that explores Mars. It takes 17 minutes, but the film in the attached video is accelerated so that the set can be seen in just 30 seconds.