Can The Salt Water Freeze? 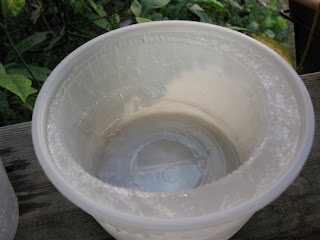 70% of earth’s surface is covered with water. Out of which 97% of the water is salt water. We all know that salt is often used to melt snow and ice on the roadway. However, did you ever wonder whether salt water can freeze? The answer is, water is the only natural substance found in all three states of matter – liquid, solid and gaseous. The solid form of water is ‘ice’. However, the freezing point of pure water is different from salt water.

Pure Water Freezing Temperature
Pure water freezes and becomes ice at 0 degree Celsius or at 32 degree Fahrenheit.
The basic difference between water and ice is related to the speed at which the molecules progress.
In the liquid form, molecules move faster than in ice.
As the temperature lowers, the molecule speed slows down and gradually forms ice.
Salt Water Freezing Temperature

Salt water freezes at different temperature, depending upon the salt content in the given amount of water.
This is because, fresh water and salt water have different chemical properties.
Adding salt to the water, causes the salt particles to arrange themselves around water molecules thereby disturbing the molecule speed to form ice.
Hence, to freeze the salt water, one needs to lower the temperature below 0 degree Celsius, so that the salt water molecules can slow down to form ice.
Sea and Ocean water Freezing point

The freezing point differs depending upon the concentration level of salt.
Hence greater the concentration level of salt in the water, the lower is the freezing point.
In order to know the exact temperature that would help to freeze the given amount of salt water, one needs to know how salty the water tastes.
For an ocean that has no fresh water supply, contains approximately 35 gram of salt per 1000 unit of water. Hence the freezing point for such water would be -1.90 degree Celsius.
The maximum freezing temperature for the most salty water (i.e. the maximum amount of salt one can mix in a given amount of water) would be -21degree Celsius.
Note: Salt is not the only element that decreases the freezing temperature of the water. In fact, any substance that can be easily dissolved in water (such as sugar) will have the same effect.