Creating Healthy Habits For Your Kids 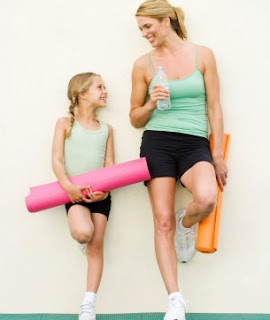 Creating Healthy Habits For Your Kids - The statistics are sobering. According to the National Health and Nutrition Examination Survey, a whopping 14% of 2-5 year olds are overweight, as are 19% of 6-11 year olds, and 17% of 12-19 year olds. And it’s not getting any better.

According to a report published recently in the International Journal of Pediatric Obesity, health professionals are estimating that by 2010, almost half of all children in North and South America will be overweight. It’s hard to fathom.

What does all this mean? Well, it can be summed up this way- this generation of children will be the first with a lower life expectancy than their parents. It’s a very, very scary thought.

As parents, you are the keeper of the keys, so to speak, of how active and healthy your children are. There is plenty you can do to start turning these statistics around and put your family on the road to better health.

First let’s take a look at their school lunch. It’s sad, but many schools are dishing up meals that are less than healthy for our kids. Pizza, hamburgers, and nachos are the daily fare at many schools, and if yours is like this then it’s time to get involved. Start talking with other parents: as a group you can really influence the administration. Chances are that making a move to healthier options is something they’ve had on their agenda for a while, and all they need is a push from you to get the ball rolling. Be proactive instead of just waiting around for something to change.


Now let’s take a look at what you do have complete control over: their lifestyle and eating habits at home.
Kids are spending more time than ever watching TV. The CDC estimates that 67% of U.S. children watch 2 or more hours per day, and 26% watch more than 4. This means less time for outside play and exercise. Want to help your kids? Don’t let them watch TV. Limit their screen time to ½ hr. per day. We’ll warn you now- this is where you’re probably going to have the hardest time. They’re going to pitch a fit when you institute these rules, much like an addict does when you take away their drug. Most experts agree that, in its own way, TV is addicting. Most people spend way more time watching than they plan to.

Don’t give in to their temper tantrums and wails of “I’m BORED!” Do what your mom used to do- send them outside! They’re kids. They’ll find something to do eventually, and chances are it’ll involve a soccer ball, a bike, or a walk somewhere.

It’s also important to take all that junk food and just get rid of it. If you buy it, they’re going to eat it. Teach your kids that the doughnuts, the ice cream, and the cookies are a “special treat”, not something they eat everyday. Replace the junk with things like apples, hummus, pre-cut veggies, yogurt, granola, and soy crisps. Again, you might have to endure some tantrums over this as well. Steel your resolve- they’ll whine until they get hungry enough to eat it. When they do, they probably won’t admit it to you, of course, but they just might like it.

Another thing you can do is stop buying pop and juice. Both are loaded with calories! Serve water or milk. Again, these are treats and not everyday fare.

It’s also important that you lead by example. If you’re urging your kids to get more exercise while you stay in and turn on the TV, the commands are going to fall flat. Get out there with your kids and walk, ride a bike, or do something else active. Show that you’re willing to do this with them.

One trick you can utilize is that of “reverse psychology”. Tell your kids that you need their help so that you can get more active. You’ll be amazed at how well this can work. They’ll be yelling at you to get off the couch and join them outside!

Although the statistics and trends can be depressing, they don’t have to stay that way. You’re in charge of your children, and their health as they’re growing is in your hands. Your decisions today will be major factors in the way they eat and live as adults, so it’s vital they learn early how to live a healthy life. You can do it!