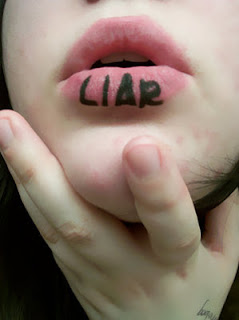 We are all at least once in our lives said some lie. Lying is the way we want to avoid the sanctions, whether on business or partner, family and friends. But with body language and our behavior can easily be detected when someone is lying. Learn some tricks that will help you detect a liar.

1. Body language
Body language is the most common indicator of lies. The person who tells lies usually avoid the contact with eyes, and often during the conversation turns to the side view. Very often the body language and the crossed arms which symbolizing the defensive state. The same is true for nervous rubbing of hands and walking around the room.

2. The inconsistency of the story
No matter how well planned a lie is always a 'hollow'. The most common errors in recounting the details, such as for instance the inconsistency in the time period in which something supposedly happened. Numerous sub-questions about the origin time and similar details can easily find out whether the person is lying or not.

4. Defensive behavior
Liars often use the attack as a defense. Starting arguments and searching for the culprit is the most common reaction, especially if you start with sub-questions to which the person has something to hide does not know the answers.

5. Intuition
Intuition is often neglected, but if you feel that the person you're talking with sounds and looks strange, do not underestimate their ability to observations but to try and find out why that weird feeling is bothering you.