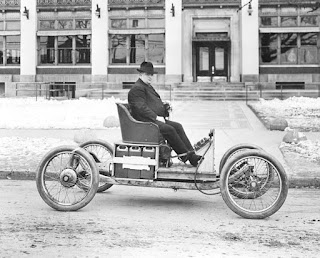 The first mechanically-propelled vehicle capable of transporting people and goods was invented by a French artillery officer Nicolas Joseph Cugnot. In 1769, he drove his steam tractor in the presence of the Duke of Choiseul in Paris at an impressive 2.5 miles per hour which many believe to be the first land speed record. The first official world speed record was set not in a car with a steam or internal combustion engine but in an electric car. In 1898, Frenchman Comte Gaston de Chasseloup-Laubat reached a speed of 39.24 mph (62,78 km/h) in his Jeantaud electric car. Electric cars were introduced in 1896 and by the end of that century almost 50% of motor cars were electric. An electric car could travel up to 100 miles (160 km) per day. A horse and wagon had to stop every 10 miles (16km), as did steam-driven cars. Gasoline driven cars often had to stop every 20 miles (32km) for engine cooling.
Email ThisBlogThis!Share to TwitterShare to FacebookShare to Pinterest
Newer Post Older Post Home