First woman flying around the world 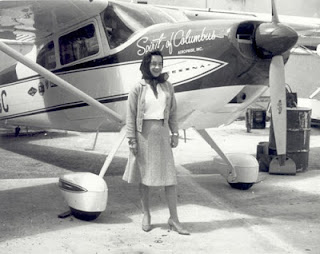 Geraldine “Jerrie” Mock became the first woman to fly solo around the world, in 1964. Her single-engine Cessna 180 was called the Spirit of Columbus. For more info, spread your wings toward the women pilot organization Ninety-Nine. The first woman to earn a pilot’s license was Raymonde de Laroche, who got hers on 8 March 1910. (By that time many women in Europe were flying, albeit without an official license.) Later the same year, Blanche Scott became the first woman pilot in the USA when the plane that she was allowed to taxi suddenly became airborne. In 1911, Harriet Quimby became the first licensed American female pilot. In 1912, Quimby became the first woman to fly across the English Channel. The first in-flight refueling was tackled by the US Army Air Service on 25 June 1923. In August, lieutenants Lowell H. Smith and John P. Richter set a world’s record by staying aloft for 37 hours and 15 minutes in a DH-4 over San Diego with the help of refueling from another DH-4.
Email ThisBlogThis!Share to TwitterShare to FacebookShare to Pinterest
Newer Post Older Post Home