For 15 years A Brave Businessman Has Rescued 25 Suicides … 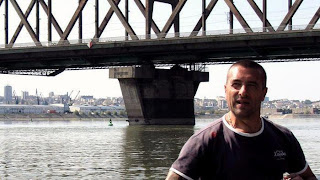 For 15 years A Brave Businessman Has Rescued 25 Suicides ….
From that day, 15 years ago, his own life would never be the same. The restaurant owner, 51, has rescued 25 people who tried to kill themselves by jumping off the tall bridge.

Always on alert in his wooden motor boat, he has pulled people out of the river’s muddy waters without asking for anything in return. “I couldn’t turn my back on
them,” he said. “They are desperate people.”


People admire him and he was awarded a hero’s plaque by city authorities. But even “Superman” can’t save everybody who jumps off the 60-foot-high bridge. At least as many as he has saved . some of have even killed themselves since Grbic’s first rescue.
He said…”When I hear that someone has jumped and I wasn’t there, I really feel bad,” he said. “My eyes are always on the bridge.”


The Pancevo Bridge became a favored suicide spot because,It is only bridge over the Danube, which is bigger and colder and has stronger underwater currents than the city’s other river, the Sava.
Grbic has rescued people of all ages and backgrounds. Some had cancer, others cited poverty or unrequited love.


A woman who jumped seven years ago, at age 18, comes to his fish restaurant every January to celebrate her “second birthday.” She is married now and has a child.
“My heart leaps every time I see her,” he said.
Email ThisBlogThis!Share to TwitterShare to FacebookShare to Pinterest
Newer Post Older Post Home