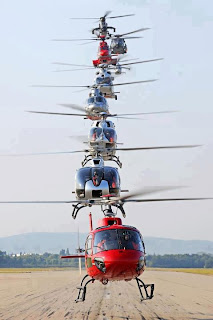 If the engine stops, thehelicopter rotor continues to spin allowing the machine to slowly land,generally without crashing to the ground.

Helicopters are safest to fly in bad weather because they can slow down, stop and/or fly backwards or sideways.


Over 3 million lives have been saved by helicopters in both peace time and war time operations since the first person was rescued from the sea in1944.

If you include military helicopters it is estimated that there are more than45,000 operating worldwide.

Helicopters can be flown across oceans if additional fuel is made available or in-flight refueling is employed.

The Jesus nut that holds the main rotor to the shaft got its name because pilots said, “Oh Jesus, if that nut comes off…”.

The fastest helicopter is the WestlandLynx, which flew at 402 km/h on 6August 1986.

The biggest helicopter was the Russian Mil Mi-12 Homer of 1968 which could lift 40,204 kg up to 2255m.
Email ThisBlogThis!Share to TwitterShare to FacebookShare to Pinterest
Newer Post Older Post Home