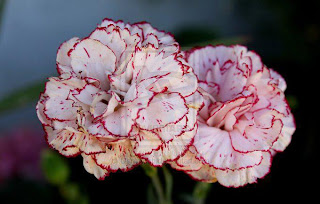 1. In Christian lore, the Carnation was first seen to bloom in the exact spot where Mary wept after watching Jesus carrying his cross through the streets of Jerusalem.2. Carnations include over 300 different species, and the Royal Botanical Garden in Madrid and the Imperial College London are studying the flower to determine how it accomplished such wide spe

cies diversity in such a short period of time.

3. The carnation is the state flower of Ohio, and is the official emblem of Mother's Day in the U.S. and Canada

4. The scientific name for the carnation, Dianthus caryophyllus, means "flower of the gods"

5. The single flowers of the Carnations species have 5 petals and vary from white to pink to purple in color. Border Carnation cultivars may have double flowers with as many as 40 petals.
Email ThisBlogThis!Share to TwitterShare to FacebookShare to Pinterest
Newer Post Older Post Home