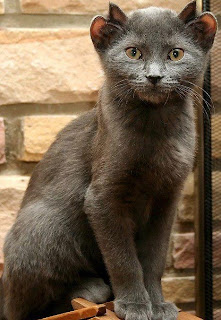 If Batman had a cat, it would probably look something like this.The household pet, named Yoda, was born with an extra set of ears.

Valerie and Ted Rock took him in six years ago after visiting a bar near their home in Chicago, where he was being passed round by curious drinkers.

They named him after the pointy-eared Star Wars character and took him to a local vet who said he'd never seen the condition before.

Multi-eared cats are rare, but not unheard of. In 2004, a six-month-old cat with two extra ears was put up for adoption at an animal shelter in Germany. In the same year, Russian media reported a kitten being born with seven ears.

Yoda's owners said he was a perfectly normal, affectionate, curious cat and a joy to have around. His extra ears, which are not thought to affect his hearing, are not attached to the base of his skull, with one placed slightly behind the other. They are believed to be the result of a genetic mutation.
Email ThisBlogThis!Share to TwitterShare to FacebookShare to Pinterest
Newer Post Older Post Home