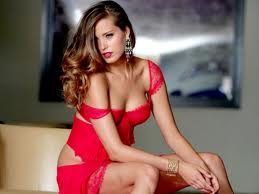 It is known that the ladies in the red are attractive to men. A new study suggests that the reason is in men's nature and instincts. In fact, scientists say that the fact that men want to get closer to 'the woman in the red' can be explained by evolution.

The researchers worked with two groups of men, and some of participants in a group was shown a photo of a woman in red and the other a woman in a blue dress.

After they were told to write what would they like to ask the woman in the picture, it turned out that the issue of the first group, designed for a woman in a red, was a lot of fun and more provocative. In the second test than men were asked to place a chair next to their own, as they would put it in order to talk with the woman on the photography. The group, which saw a lady in red dress set a chair much closer than those who had the image of women in blue.

'The woman who has a red dress or skirt will be irresistible to man. Also, women who correspond with men over the Internet should put their photo on which they are dressed in red" says Nista Kaiser from the University of' Rochester in New York.

The fact that men have a desire to be closer to the women in red, is explained by natural instincts. For example, the red color in the animal world means the period when the most fertile female, and female baboons or chimpanzees are obviously very flushed at the time of their ovulation