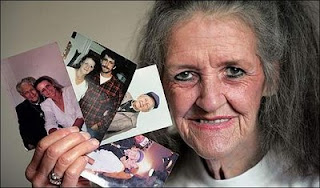 This lady is Linda Wolfe, 71, who first wed at 16, has  24 husbands till now, which is the world record for
the Most married woman. She has said that she is "addicted to the romance" of getting married.

The best lover was Jack Gourley, who liked skinny dipping and impromptu trysts. She wed him three
times. She has had seven children by her different husbands and been a stepmother to many more.

The strangest exchange of vows took place at the Indiana Reformatory at Pendleton to a one-eyed inmate named Tom Stutzman. "It's easy to sum up," she said of her life. "When I was younger, I was just a snot-nosed kid, but the neighbourhood boys were all in love with me. They all wanted to marry me. I got to thinking that in some of these towns where world record holders live, they have signs outside
city limits. I wouldn't mind if Anderson would have a sign like that." Her last marriage, a decade ago, was a publicity stunt.

It was to Glynn Wolfe, who in taking Linda as his bride meant he was the world's most married
man, at 29 times. He died 4 years later aged 88. She has been single now for 12 years, her longest
stint unmarried since childhood: "But I would get married again," she said, "because, you know, it gets
lonely."