Popcorn, the High Fibre Snack n your regular partner esp at a movie theatre has Even Higher Antioxidants Levels Than Fruits and Vegetables. 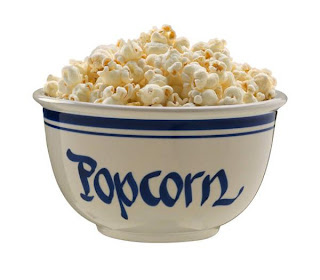 Popcorn, the High Fibre Snack n your regular partner esp at a movie theatre has Even Higher Antioxidants Levels Than Fruits and Vegetables. Scientists recently reported that popcorn contains more of the healthful antioxidant substances called "polyphenols" than fruits and vegetables. "Popcorn may be the perfect snack food. It is 100% unprocessed whole grain as against all other grains which ar

e actually processed and diluted with other ingredients - meaning only 51% of the weight of the product is whole grain. The average person only gets about half a serving of whole grains a day, and popcorn could fill that gap in a very pleasant way,"

In another surprising finding, the researchers discovered that the hulls of the popcorn -- the part that everyone hates for its tendency to get caught in the teeth -- actually has the highest concentration of polyphenols and fiber."Those hulls deserve more respect," "They are nutritional gold nuggets." One serving of popcorn will provide more than 70 percent of the daily intake of whole grain.

But the way people prepare and serve popcorn can quickly put a dent in its healthful image. Cooking it in a potful of oil, slathering on butter, pouring on the salt makes it a nutritional nightmare loaded with fat and calories.
Go for air-popped popcorn as it has the lowest number of calories.

However popcorn cannot replace fresh fruits and vegetables in a healthy diet. Fruits and vegetables contain vitamins and other nutrients that are critical for good health, but are missing from popcorn.
Email ThisBlogThis!Share to TwitterShare to FacebookShare to Pinterest
Newer Post Older Post Home