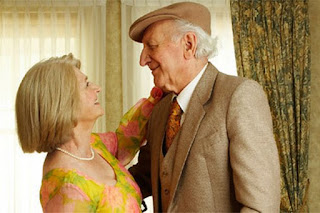 Men and women perceptions of aging and its official start are substantially different. Just as the men with a few extra pounds can be charming, so it is with a gray hair. While the first sign of aging for women is gray hair, men are not ignored for years until at least their 58 year.

A new study has shown that women consider themselves old when they enter the threshold of the thirties and the age of 29 years, while men will say to themselves that they are not old until the celebration of their 58th birthday.

A research that is currently implemented in the UK showed that women begin to feel old, but when they receive their first grey hair.

Men, however, consider the gray hair is sexy and they are ready to say that they are old only when they can no longer meet their partners in bed. Professor Cary Cooper from Lancaster University in the UK said that in today's world, men do not have to be nice, but it is important that women are pretty. In all the magazines you will find tips on how to preserve youthfulness of the face and body. Women are also governed by it and as soon as they cease to feel desirable and when they realize they no longer keep up with fashion trends start to be considered old.

On the other hand, men are not bothered too much by their appearance. They are more focused on their careers and do not feel old until they get up in the years, or until they retire.