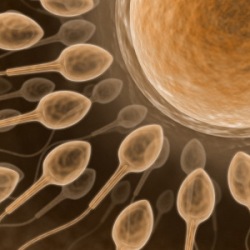 Sperm is produced in the testes in the small structures called epididymis. During sexual arousal, the muscles push sperm from these structures through a tube called vas deferens. Here the sperm is mixed with other fluids, such as those from the prostate gland, the seminal vesicles and the Cowper's gland that all make up semen. Only one percent of the semen is actually sperm, the rest is fructose, amino acids, vitamin C, calcium, protein, sodium, zinc and citric acid.

Couple's chances of successful conception depend not only on sperm's quality, but the environment, where it gets in. Sperm can be viable in alkaline conditions, while most of the time cervical mucus is acidic, meaning that sperm cannot survive in it. However, prior and during ovulation, time which is favorable for conception, the pH of woman's cervical mucus becomes sperm-friendly environment, allowing it to swim and fertilize the egg.

Don't wear tight underwear, put your laptop near your privates or take warm baths. Men often hear those warnings, but what's the problem with heat? Nature is wise, that's why man's testicles are located outside the body, where temeperature is lower than inside the body. The thing is that sperm is made only at lower temperatures. When the scrotal temperature increases, it can damage sperm, thus your chances of conceiving a baby.

If sex is not a source of pleasure for you, but rather make your privates swell, itch and result in other icky symptoms, you may be one of those rare people, who suffer from sperm allergy. Women, who are allergic to sperm, are actually allergic to particular protein in the semen. There are even cases when a man is allergic to his own semen, having flulike symptoms after ejaculation. Interestingly, semen allergy is treated with semen, but very small amounts of it.

It takes around 10 weeks for the sperm to reach maturity. Once the sperm is inside the woman's body it can live up to 5 days or even longer under favorable conditions. However, when it is outside the body, it can only survive from few minutes to several hours.

Every day a man produces about 70 to 150 million sperm, while during ejaculation he can produce from 200 to 500 million sperm. But what happens, if man does not have sex or masturbates? In this case, the sperm is broken down and reabsorbed by the body with all its nutrients and its untapped potential.

A healthy male produces up to 150 million sperm every day. And while the average ejaculate contains as much as a quarter billion sperm, the route to the egg is not an easy one. There are a lot of obstacles, such as unfavorable conditions of the vagina or the wrong direction it takes to the other fallopian tube. Only about a hundred of sperm can make it closer to the egg and only one: the strongest and the fastest, fertilizes the egg.

While women are born with the limited amount of eggs, men can never run out of sperm. In fact, men can renew their sperm supply just after 15 minutes after ejaculation. However, it should be mentioned that with the age the quality of sperm may become a bit worse with greater number of slower swimmers and more sperm with DNA damage.