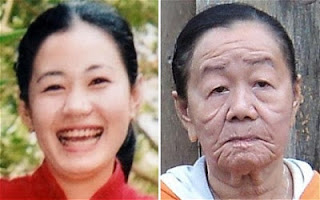 Nguyen Thi Phuong from Vietnam could not see even in her ugliest dream what had happened to her in reality and only in a few months. The story is, believe it or not, about a 26-year-old woman who aged 50 years overnight and now at 26 looks like it is 80 years old.

Her story has left in shock even doctors, and her husband said that although his wife looks like a 80-year-old woman, his love has not faded. Since it happened Nguyen constantly covers the face with a mask because it is very wrinkled, in order to protect herself from prying eyes of other people.

While showing her wedding photo from the 2006, she said that five years ago she was beautiful, and not ugly like she is now.

She believes that her troubles were caused by an allergy to seafood and specifically mentions the reaction that occurred in 2008, when allergy scratched her, even while she was sleeping. In order to eliminate the itching, this woman bought a medicine in local pharmacy instead of going to the doctor. She decided that because she and her husband earned a little money and did not have money for a doctor.

After a month of using products, her skin was less itchy, but started to shoot and got old. Frightened woman then tried to find out some solution in a traditional medicine, but it did not help her skin to stop getting old. Her black hair, voice, teeth, and other healthy organs are evidence of her youth. Only her skin has been affected by the rapid aging. Some believe the condition is lipodystrophy, a rare syndrome that causes a layer of fatty tissue beneath the surface of the skin to disintegrate while the skin itself continues to grow at a startling pace, according to the Telegraph.

Doctors say she has a skin disorder due to use of treatment and that she is suffering from a rare disease caused by deteriorating tissue under the skin. Dr. Hoang Van Minh of the HCMC Medicine and Pharmacy University Hospital visited Nguyen in her hometown to run some tests on Tuesday. He believes she may have a rare condition caused by the presence of excessive mast cells, called mastocytosis.

Despite the various theories of other doctors, Dr. Hoang is 90 percent confident that Nguyen has mastocytosis, and has a treatment plan that could restore 50-70 percent of her skin, according to Thanh Nien News.

The only consolation this unhappy woman finds in her husband. She said that with him she feels more confident to live and work.