A Teenager is a living Cartoon character 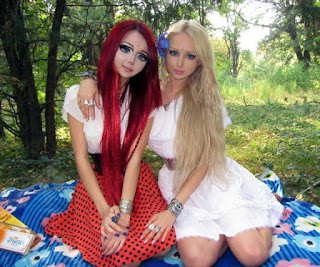 Anastasiya Shpagina, 19, who is an animated Japanese cartoons fan, takes style inspiration from the cartoons and computer animations that have a huge following in Japan. She has even adopted a Japanese name -- Fukkacumi.

A Ukranian teenager has literally transformed herself into a living cartoon character, complete with miniature waist, coloured hair, and a defined pout.

With her enormous, glassy eyes, purple hair and coquettish pose, this girl could have stepped from the scene of a Japanese anime film.

Shpagina, who measures 5'2", is already reported to have slimmed down to just over six stone in her attempts to resemble a living anime character. She is said to spend 30 minutes to apply her make-up to each one of her eyes.

With over 10,000 fans on Facebook, the teenager also posts videos on YouTube showing how she applies her make-up.

One of such video clips, in which Shpagina is seen revealing how she achieves her 'flower fairy' look, has been watched more than 150,000 times.
Email ThisBlogThis!Share to TwitterShare to FacebookShare to Pinterest
Newer Post Older Post Home